The e-Perspectives of e-Patient Dave

Recently I, along with a myriad of others around the world, was introduced to the passionate, personable and thought provoking e-Patient Dave through his TED Talk ‘Dave deBronkart: Meet e-Patient Dave. 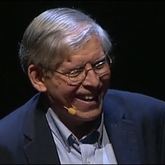 I was so inspired by his presentation, I immediately took to Twitter to send him a message of congratulations – and an invitation to become involved in my Innovation Interview Series – not least because of my long held interest in Innovation in healthcare, and in meHealth in particular.

Unsurprisingly, with  more than 180,000 views so far, and having been subtitled in nine languages, Dave’s TEDTalk has proven to be an international hit.  So much so, that TED invited him back to do a TED Conversation on “Let Patients Help”   scheduled for Wednesday 27 July at 1:00 p.m. (US) EDT.

My interview with Dave, conducted on 26 July, will be posted in a series of ‘chunks’ – some in text, and some in video format.

(NOTE: Excuse the quality of the filming/lighting/all-other-ing of this interview.  Suffice it to say, Spielberg has no worries I’m going to be sitting in his chair anytime soon!)

This first posting, to coincide with the Ted Conversation, will look at two questions in particular: the responsibility of Healthcare users and the demands they are entitled to make.

But first, lets talk about TED:

You’ve recently done a TedTalk and had a great global response to your presentation.  What has been the most surprising outcome from this success.

It’s no surprise that being  a hit on TED.com has been phenomenal at spreading the meme.  What is a pleasant surprise is that it’s clearly gone viral: the idea is currently spreading at over 1500 views a day, and volunteers have added subtitles in eight languages.  WHAT a pleasure for any advocate, to see an idea take off like that, especially across cultures. Farsi!

And what a testament to the power and reach of TED.

And who brought you into TED?

“That’s my friend Lucien Engelen, His Twitter name is Zorg – which means ‘Care’ in Dutch – 20, and he is a visionary.  A visionary who has the ability to execute. About two years ago he got […] authorized to run a TEDx, the smaller regional franchise TED events, in Maastricht.  A year before it happened he announced that a patient was going to be the first speaker at this medical conference.” 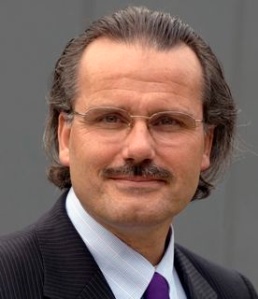 Lucien Engelen is a Health 2.0 Ambassador, the Director of the Radboud REshape & Innovation Center, and on the Advisory Executive Board at Radboud University Nijmegen Medical Centre

“Clearly this is tapping into something in consumers cross culturally – people want to be involved in their healthcare around the world.”

What responsibility do you think healthcare users need to take in their own health?

The simplest eye-opener view was put forth in December 2008 by endocrinologist Stanley Feld: “Physicians are coaches. Patients are players.”  You don’t get to sit on the couch all day and then demand participatory healthcare. With rights come responsibility.  Get up off your ass; be physically engaged in your life, not just your care decisions.

For those inclined toward a more delicate view, and perhaps a more formal model, Jessie Gruman’s Center for Advancing Health has developed a terrific ten-piece framework for patient engagement:

For details see this post with her speech about it and links to the full framework documents.

Should patients be allowed to read their doctors’ notes, access lab result and see images they aren’t necessarily qualified to assess?

“There’s several levels of thinking about this.. here’s entitled according to the law, and there’s what I think makes sense.”

“How do we improve healthcare?  And I assert that we have to start there, because we are approaching a genuine healthcare famine.”

Lucien Engelen, who hosted TEDx Maastricht… he’s going to be running the REshape academy in September, where I’m going to be doing my ePatient bootcamp. 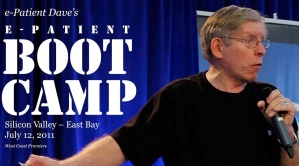 “Now anybody who plans to be alive in 2025, and there probably will be more humans in the Netherlands than there are today, is going to be facing a care shortage.  So it just seems unavoidable that that we’ve got to hand people a lifeline to try to help themselves.”

My doctor, Dr. Danny Sands, is famous for saying, “How can patients be engaged in their care if they can’t see the information?”

“For the patients to be a second set of eyes, to check the data quality, costs the healthcare system nothing more and will reduce defects.”

What responsibility do you think healthcare users need to take in demanding change in the healthcare system?

Well, that varies a lot.  All my life I’ve felt that demands aren’t necessary until one has asked courteously, offering partnership in creating the change and doing the work.

But there are times when the establishment simply will not listen.

It happened for hundreds of years with women’s suffrage.  It happened with the civil rights movement: folk singer Malvina Reynolds penned a cheerful ditty “It Isn’t Nice” about what you sometimes have to do for justice:

Although I followed folk music in the Sixties, I didn’t hear that song until this year, in the context of yet another movement: gay rights.  It was mentioned in an episode of our great PBS series The American Experience the Stonewall Uprising.

One of the gents who was in that movement recounts what gays eventually had to do to be granted the right to live and let live.  Will we see a day when patients march in the streets?  Gays chanted “Out of the closets and into the streets!”

Will patients march, chanting “Out of the johnnies [US slang for hospital gown] and into the streets – stop the killing now”?

Personally, I’d prefer the chant “Let Patients Help.”  But if healthcare ignores that, who knows.

End of Part One

In Part Two of my interview with e-Patient Dave, we’ll look at, among other things:  Capital I’ Innovation in healthcare, healthcare heroes, why Dave became a healthcare advocate (and the responsibilities that entails) and changing the world.

[ There’s a lot more to come from e-Patient Dave, so keep your ears tuned, and your eyes peeled – conversely, you could make things easy on yourself and either follow this blog or subscribe to the RSS feed! 🙂 ]

For more information on e-Patient Dave, check out:

(Kim and Dave Skype’d between from their homes in Sydney and Boston  on July 26, 2011. This is Part One of a multi-part series.)

Part Two of this interview can be found here