The NBN: Are We Bothered… and Should We Be?

Brad Howarth is a journalist, author and speaker with more than 15 years  experience in roles which include marketing and technology editor at  business magazine BRW, and technology writer for The Australian.  His first book, ‘Innovation and Emerging Markets‘, was a study of entrepreneurial Australian technology companies and the process of commercialising technology globally.  ‘A Faster Future‘ his second, is co-authored, with Janelle Ledwidge. In it they investigate the future of broadband applications and services and the impact these may have on business, society and individuals.

The recently published ‘Australian Industry Group National CEO Report: Business Investment in New Technologies’ noted that forty five percent of responding CEOs, from a wide range of businesses, said they lacked the skills and capabilities necessary to take advantage of the NBN.  This  has  risen from twenty percent just three years ago.

What are  your thoughts on this situation; and do you think that their solution of staff training and hiring will solve the problem?

The hiring and training of staff will only solve the problem if we also train our leaders to recognise the problem in the first place and instil in them both a desire and capability to do something about it.  I’m regularly receiving feedback that suggests that Australian businesses are struggling to image their future in a high-speed broadband world, and that’s almost regardless of whether the NBN is completed or not.  All too often short term issues such as the economy or carbon tax are getting in the way.

It’s not a great outcome to focus all your attention on managing the impact of the carbon tax to find your business has been undermined by new competitors coming in on the Internet, or find that too many of your customers have changed behaviour and no longer need you.  Australian businesses need to spend a lot more time thinking about their broadband futures – and there is huge scope for innovation once they start doing so.

You wrote your second book, ‘A Faster Future’ at a very interesting time last year, as there was a great amount of debate around broadband connectivity.

The original idea was conceived not long after the announcement of the Fibre to the Home National Broadband Network model.  It was initially written to explore the uses of high-speed broadband and then evolved into a much broader picture.

It was very interesting to watch the debate going on in Australia, about the need – or otherwise – for high speed connection.

If you go into the rural area the debate goes away very quickly.  The debate’s been driven along primarily party political lines I suspect; so, it has more to do with posturing.

Are you saying that rurally it’s taken as a given that the NBN is coming, and it will be a positive thing?

Most regional councillors, have fallen over themselves to get their particular part of the world hooked up to broadband network.  Now whether they know exactly what to do when they get it is a little bit harder to say.  But certainly – given that so much of what we take for granted in the metropolitan regions isn’t available in regional areas – they’ll get benefits from simply bringing them up to speed.

Do you see much potential for (onshore) Australian companies to get involved in the actual building of the NBN and share in the potential profits; or will it mainly be offshore internationals who come in and make the most out of it?

In phase one, which is equipment supply and roll-out, you’re obviously seeing contracts awarded to Alcatel-Lucent and others for a lot of developments on the network…  the fibre cable itself.  Mainly because Australian companies don’t make that stuff.  To the best of my knowledge, we don’t have a company here that makes GPON equipment, so there is really no choice there.

When it comes to the deployment, I think you’ll find there’s a lot of Australian involvement in the roll-out and deployment of the network itself.  And certainly it’s going to employ a huge number of people.

It may be that initially, of 30 odd billion dollars spent, a part of that may go to foreign manufacturers; but that’s really not a significant component of the actual network itself.

It has been suggested that, re the NBN Broadband, and the Government’s National Digital Economy Strategy 2020, many of the initiatives proposed could already be undertaken successfully with current infrastructure.  What is your opinion?

From that perspective, it is already possible to drive from Sydney to Melbourne, so clearly building airports is a waste of money.  Restricting investment to the goals of the Digital Economy Strategy represents short term thinking.  This is about investing for the long term.

In ‘A Faster Future’ you say that it may take a few years for a killer app for broadband to show up, but as things move so much faster now, could it not be right around the corner?

It could.  Actually, it is probably already here, we just don’t know it yet. 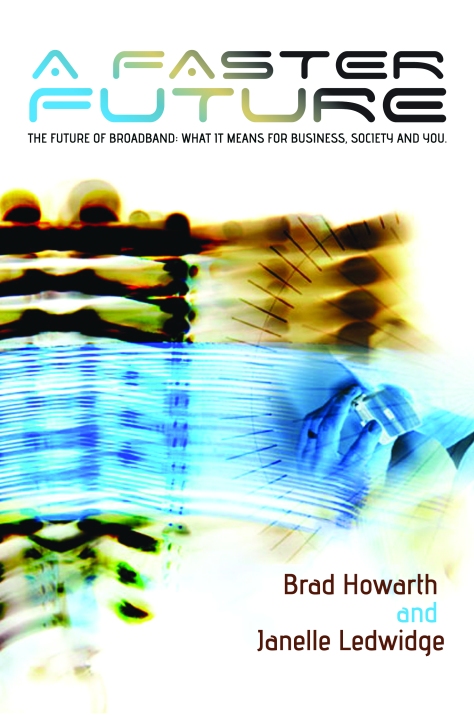 Where are you hoping to find the next true innovation?

The area that I think is obviously apparent today is interface technology – devices like the Kinect, the Wii, and so on – which enable us to interact with machinery through mechanisms other than our fingers.  That’s already there, but I think it’s got a long way to go.

You’ve seen derivations of that… the whole gesture based computing paradigm that’s emerging through the iPad and various other capture devices.  It is basically building a whole new language.

I think if you’re looking for ‘Capital I’ Innovation, look at a company like Emotiv and the work it’s doing with the EPOC headset and using brainwaves to become a control and measurement mechanism.

Yeah.  I think what she and the team are doing probably does represent ‘Capital I’ innovation.  Yes, it is an Innovation within a stream, but then the invention of the automobile was the extension of transport; the invention of electricity was an extension of power.  So, I think that’s definitely one.   I’m not really certain that they are too many others out there at the moment.

If you take broadband internet, I think there’s so much ‘small i’ innovation to come on that platform.  We don’t need to build faster-than-light telecommunication systems based on paired photon matching because we’ve got a truck-load of work to do with the technology that we have already developed.

But I think you might see some ‘Capital I’ innovation eventually come off of broadband… you saw a glimmer of that in Second Life.  Combine the notions of high definition with spatial realism in terms of video and audio, and possibly even haptic sensory input, then you’ve got a new platform there.

Once we’ve moved to a system where you can do direct stimulation of the brain itself, so you can actually start inputting data directly into the brain and bypassing the senses – going past the nose, eyes and ears, maybe even the fingers – in terms of haptic responses, then we’ll find a new platform for ‘Capital I’ innovation.  The Emotiv stuff is going in another direction.  It’s taking what’s in the brain and putting it back out to the world.  I think we’re only at the earliest stages of being able to see anything there.

But there is so much work to be done with what we’ve already got.  You could stop fundamental research tomorrow and innovation would continue for a very long period of time – although I wouldn’t advocate that.  We haven’t even really harnessed all the capabilities of electricity yet.

Australia has a proud tradition of adapting, some may say Innovating, healthcare to match the geographical barriers and vast remoteness of the continent.  Since 1928 the Royal Flying Doctors Service has serviced those living in rural, remote and regional areas of Australia, utilising the technologies of motorised flight and radio.  Is there enough emphasis on continuing this legacy via the potential of Broadband?

There is a lot, but there should be a lot more.  Actually, that’s one of the areas of the government where promotion of the National Broadband Network is incredibly strong on.  I think the argument for the NBN economically could be made almost entirely on the benefits to the health sector.

That said, I get the feeling that you may think innovation is an overused term.

Passive innovation, sitting around navel-gazing… it’s something that we probably focus too much on as opposed to finding practical methods for implementing Innovation.  I want companies to actually get on with it.  We need to start injecting the theory into business practice.